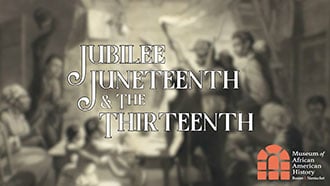 "Jubilee, Juneteenth, & Thirteenth" documentary screenings throughout the month of February at the African Meeting House

You don't want to miss, "Jubilee Juneteenth & Thirteenth," A documentary produced by the Museum of African American History Boston and Nantucket, highlights the historical context, significance, and often overlooked influences of Boston's Black community in moving America's trajectory toward freedom and equality and led to the abolition of slavery in the United States. It explores the importance of the African Meetinghouse, built by and for Black people in 1906 as Boston's first black church. It stands today as the oldest original black church building in America. For nearly six decades preceding the Civil War, the African Meetinghouse was the epicenter where much activism to abolish slavery was born and bred. The film also documents the history of slavery in Massachusetts during the Colonial and American Revolutionary periods and addresses the impact of the laws during that time and insight into the Boston antebellum and the abolitionists' movement. The film further addresses the effects of the Civil War and how it led to the Emancipation Proclamation and its layered impact on ending slavery and the development of the 14th and 15th Amendments. The program will illuminate and tell the stories of unknown heroes such as: Elizabeth "MumBet" Freeman; Lewis Hayden, John S. Rock, William Wells Brown, and William Cooper Nell, Abolitionist, Journalist, and Author that organized the Jubilee of 1863 at Tremont Temple. Admission is $10, free for members. (Length: 55 minutes) 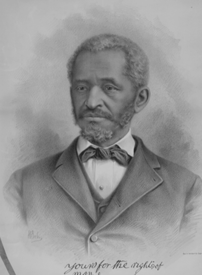 Lewis Hayden - abolitionist, businessman, lecturer, and politician - is often described as a “man of action.” An escaped slave, he stood at the center of a struggle for dignity and equal rights in nineteenth century Boston. His story remains an inspiration to those who take the time to learn about it.

On view throughout February 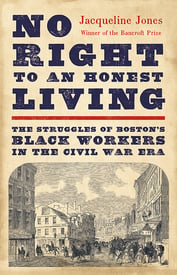 NO RIGHT TO AN HONEST LIVING: The Struggles of Boston's Black Workers in the Civil War Era

Save the Date! You won't want to miss this book reading and discussion on author and award-winning historian Dr. Jaqueline Jones's new book, "NO RIGHT TO AN HONEST LIVING: The Struggles of Boston's Black Workers in the Civil War Era." Hosted by award-winning historian, Dr. Kerri Greenidge, author of "The Grimkes: The Legacy of Slavery in an American Family", Historian in Residence at the Museum of African American History, and Mellon Assistant Professor, Studies in Race, Colonialism, and Diaspora at Tufts University. This event is FREE to the public. Register today! For group ticket sales, please contact history@maah.org. 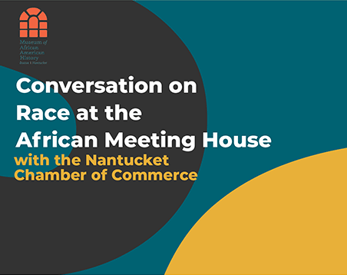 Conversation on Race at the African Meeting House 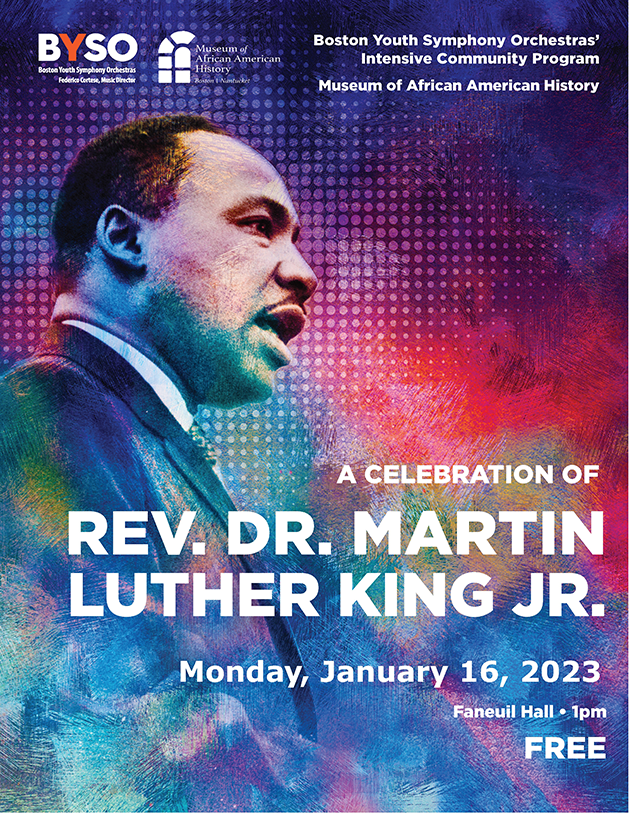 Boston Youth Symphony Orchestras (BYSO) and The Museum of African American History come together to celebrate and honor Rev. Dr. Martin Luther King Jr. on Monday, January 16, 2023 at 1pm in Faneuil Hall. The tribute to Dr. King will feature classical music, spirituals and freedom songs performed by young musicians from BYSO’s Intensive Community Program alongside distinguished leaders who will evoke the power and the promise of the civil rights hero through remarks, readings, and spoken word. The keynote will be delivered by L’Merchie Frazier, visual activist, public historian and artist, innovator, poet and holographer.

Join us for our annual commemoration of the original 1863 Grand Jubilee concert in Boston, where members of H+H performed in celebration of Lincoln’s enactment of the Emancipation Proclamation, in its 165th Anniversary.

The Handel and Haydn Society and the Museum of African American History partner to present the tenth annual Emancipation Proclamation Concert, a joyous celebration of liberty and freedom. Join H+H musicians, National Poetry Slam Champion Regie Gibson, and conductor Anthony Trecek-King to commemorate Boston’s historic central role in the abolition movement, to celebrate the spirit of progress for human rights, and to recognize the role of music in creating alliance and belonging.

Special guest Sheri Shepard joins the Museum of African History  to host the most anticipated annual events in Boston! Sunday, December 11, celebrates Boston's unique African American community and experiences the compelling stories of the past and present to inspire pride and continue the legacy of equality for all. Join us for an evening celebrating history and the extraordinary accomplishments of men and women from the 18th and 19th centuries inNew England. The event will honor our 2022 Living Legends —Dr. Beverly Edgehill, M. L. Carr, and Bob Rivers. Enjoy gourmet cuisine, bid on exclusive live auction items, and mingle with Boston's most prominent CEOs, diverse community leaders, and influencers. Your support for the Living Legends Gala signals to all your commitment to highlighting Boston's extraordinary past and its role in creating a more inclusive present and future.

Drumfolk Performance with Post-Show Artist Talk Back with Step Afrika! 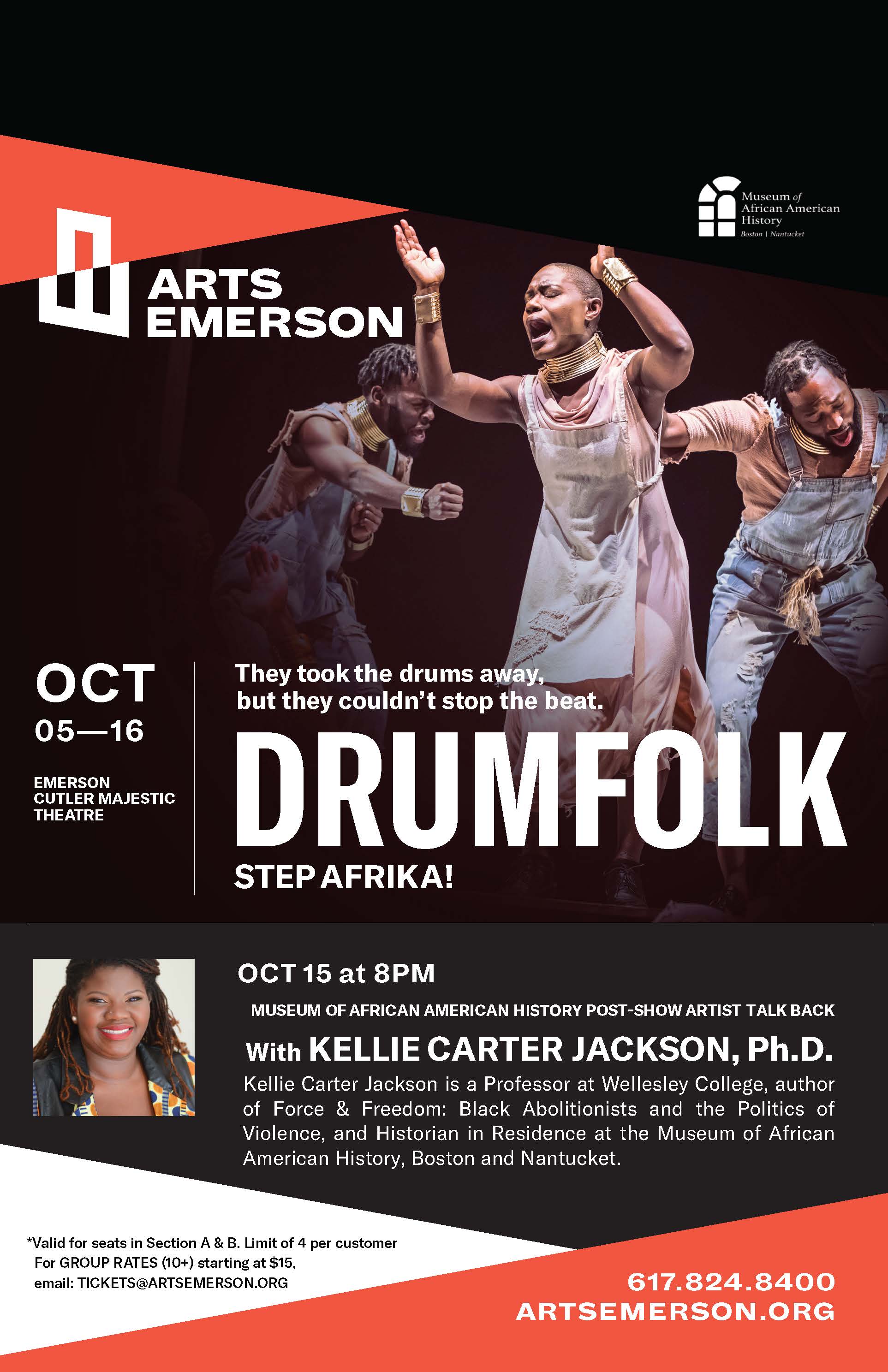 The story of Drumfolk is the story of the unstoppable power of expression in the fight for freedom, that continues to galvanize and inspire us today. Arts Emerson is proud to be a co-commissioner of this stunning work, which celebrates the resilience of black artistry and community in the face of forces that would silence and destroy. Join us after the show for a special Post-Show Artist Talk Back with Step Afrika! founder C. Brian Williams and Museum of African American History Historian in Residence, Kellie Carter Jackson, Ph.D.

Join us on October 13th @ 6:30pm ET for this year's virtual award event featuring remarks by our esteemed panel of jurors, our two brilliant finalists, and a conversation with winning author Howard French moderated by GBH's Under the Radar host Callie Crossley. The first 100 registrants will receive a free copy of one of this year’s winning books and other goodies in MAAH Stone Book Award gift boxes.The 2022 MAAH Stone Book Award Virtual Event is hosted by the Museum of African American History and the James M. and Cathleen D. Stone Foundation, in partnership with the Kennedy Institute. 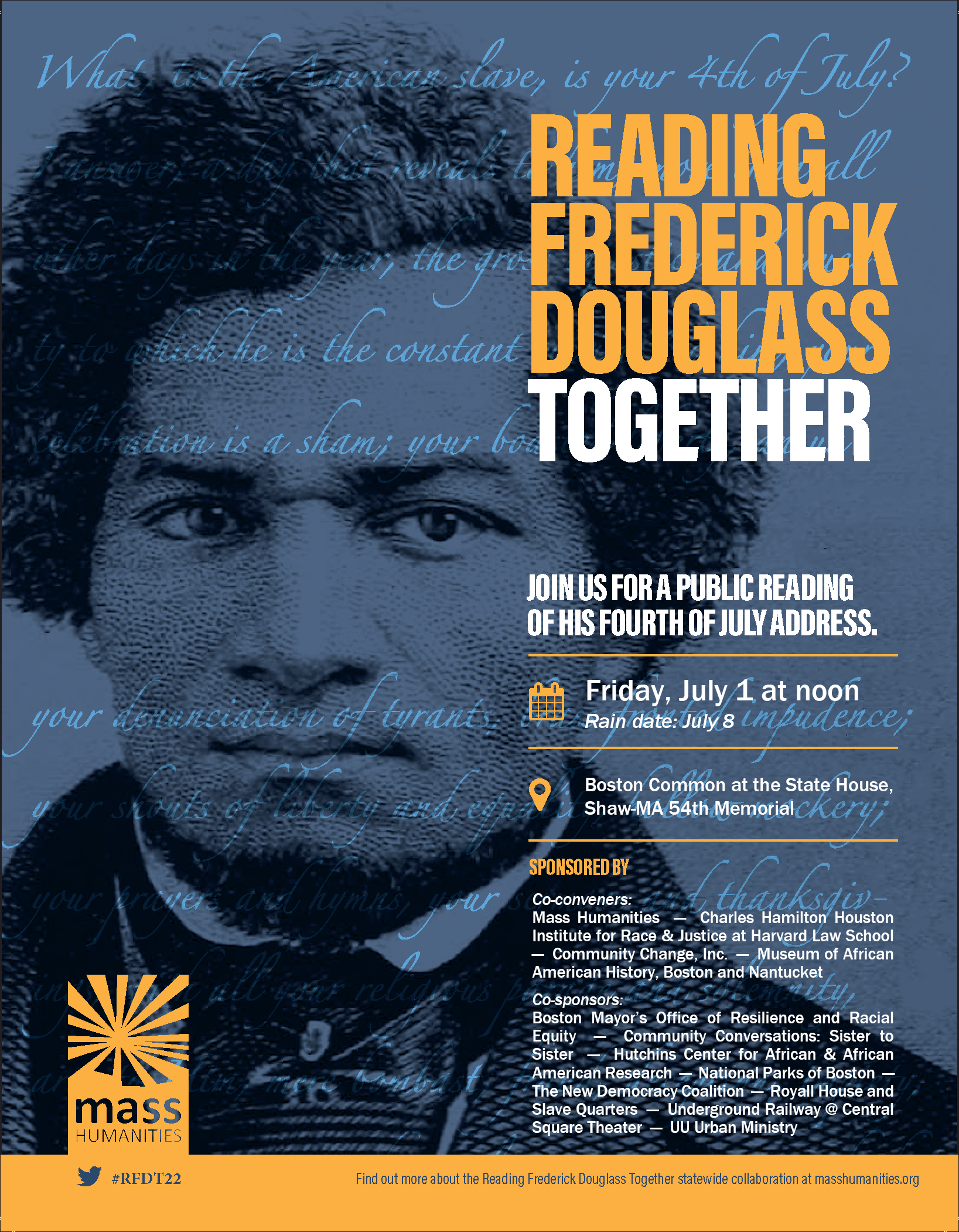 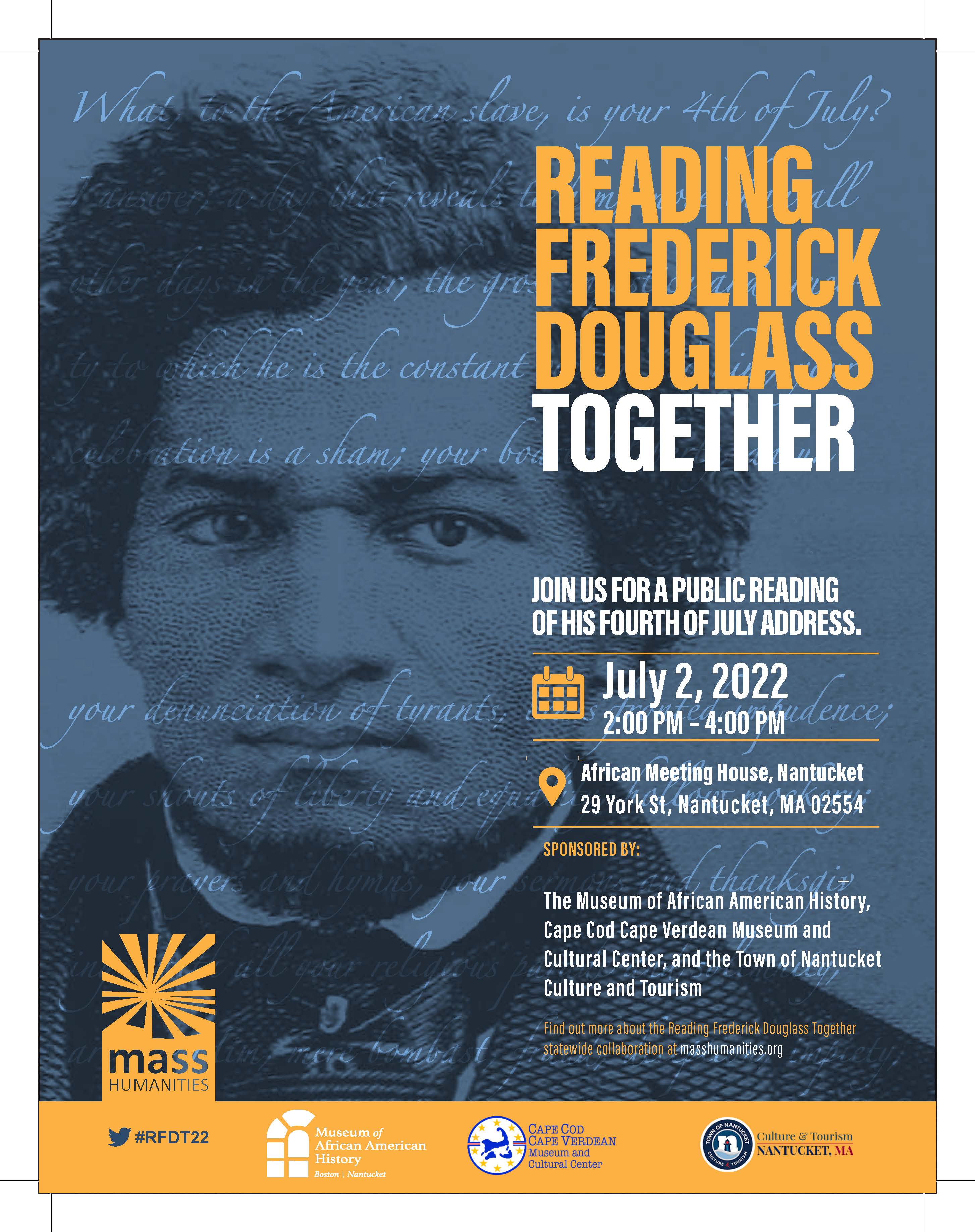 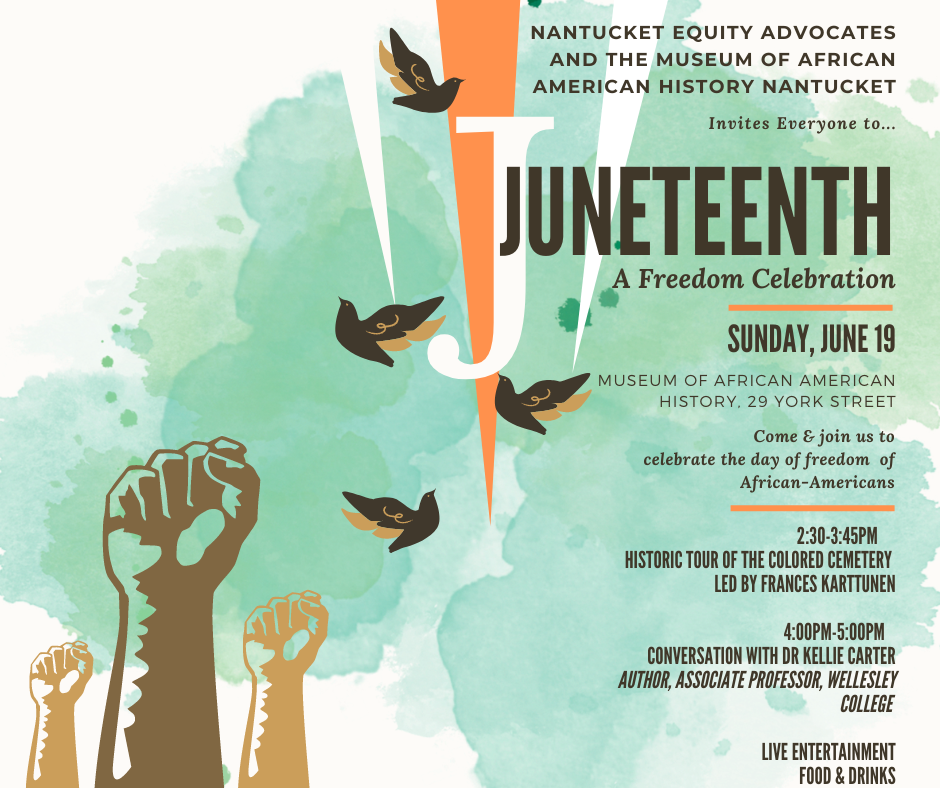 Join us and the Nantucket Equity Advocates in person at the African Meeting House on Nantucket for a Juneteenth Celebration. Frances Karttunen will lead a tour of the Historic Colored Cemetery on Nantucket at 2:30pm followed by a conversation with Dr. Kellie Carter Jackson at 4:00pm.

A Calling to Come Back: Understanding Why Nantucket Locals Revisit a Community Museum 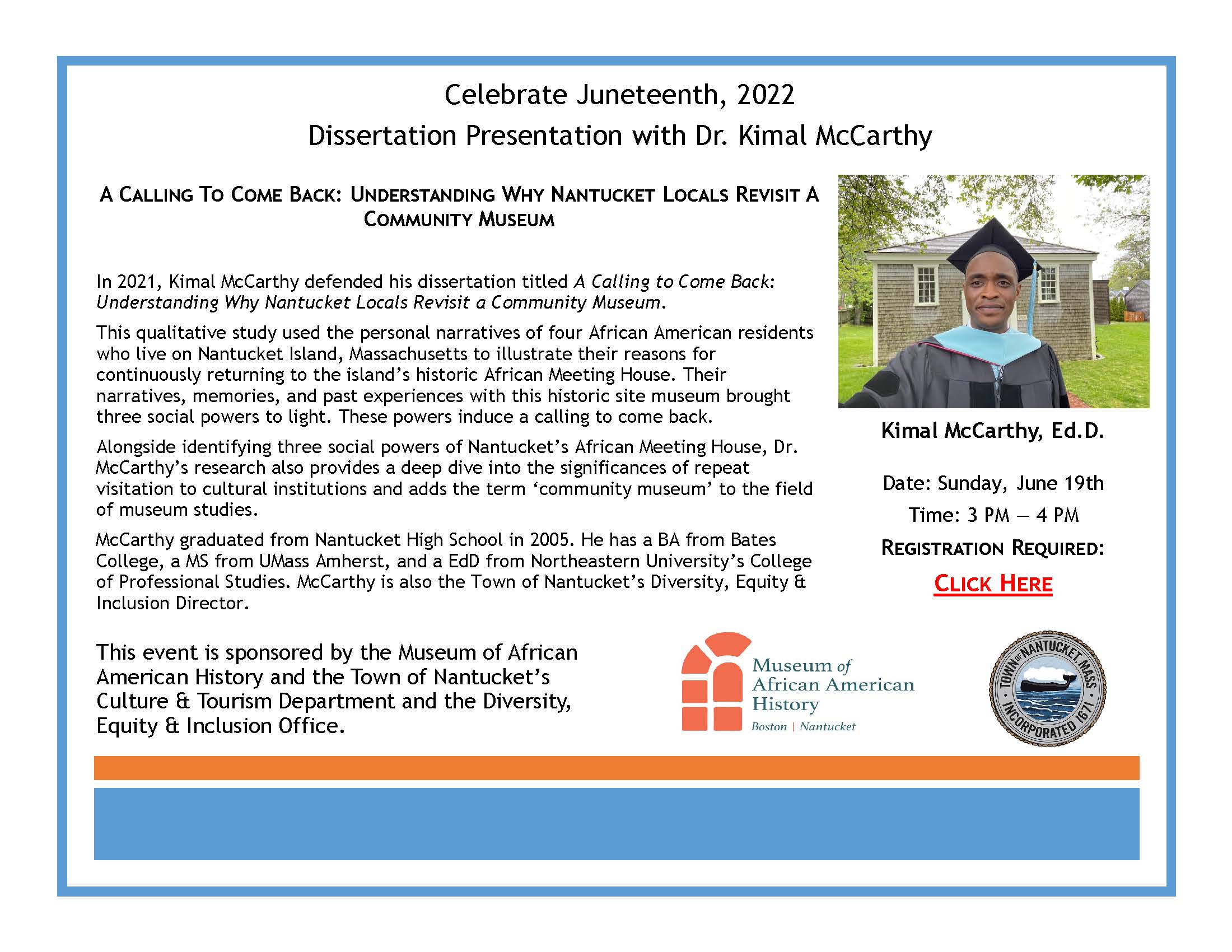 In 2021, Kimal McCarthy defended his dissertation titled "A Calling to Come Back: Understanding Why Nantucket Locals Revisit a Community Museum." Three social powers were identified. These powers induce a calling to come back. Alongsideidentifying three social powers of Nantucket's African Meeting House, Dr. McCarthy's research also provides a deep dive into the significance of repeat visitation to cultural institutions and adds the term "community museum" to the field of museum studies. 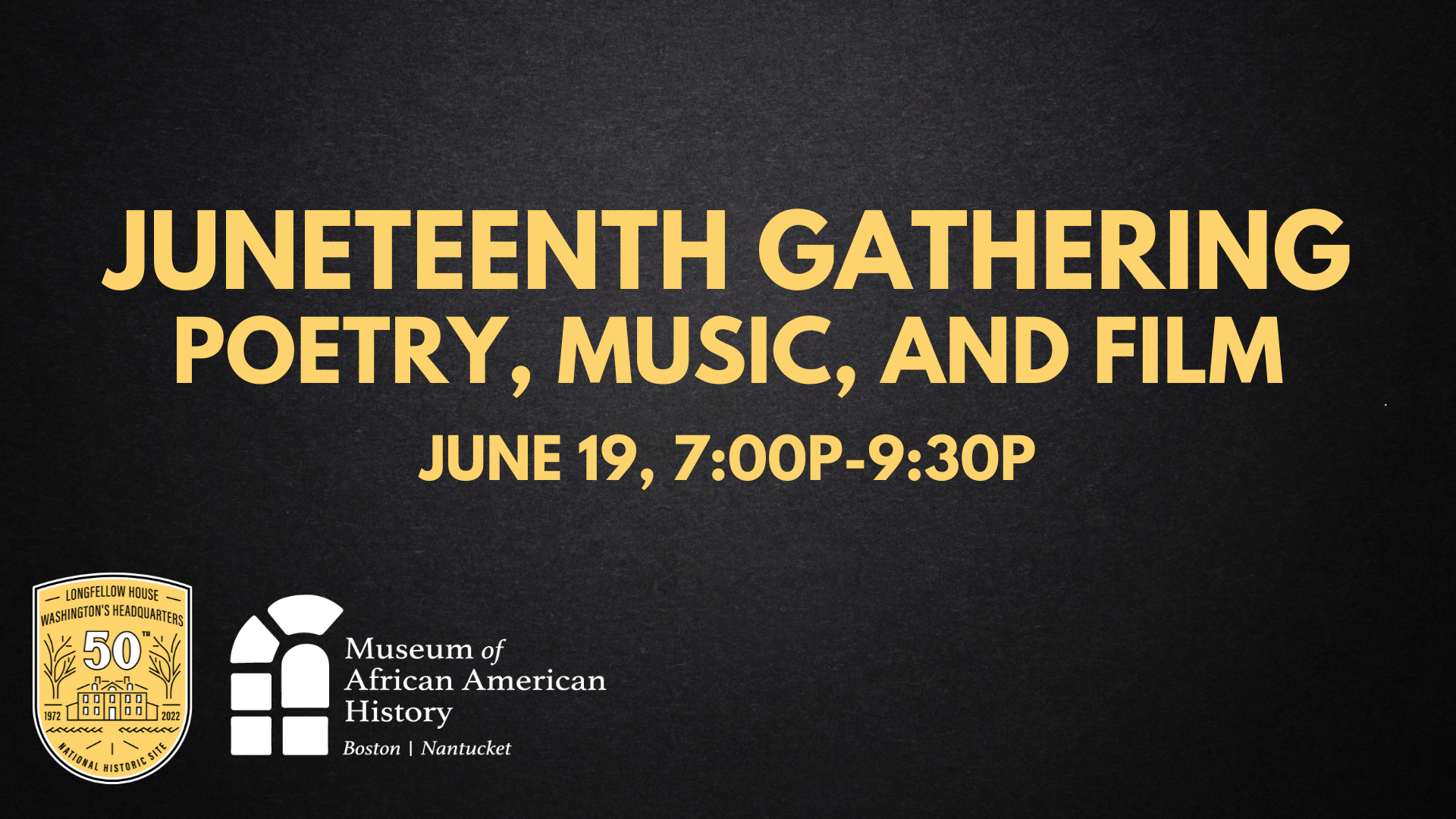 Gather with your neighbors the evening of June 19th at 105 Brattle St. in Cambridge MA, as we partner with the Longfellow House, the Cambridge Black History Project, and History Cambridge. Picnics, blankets and lawn chairs are welcome. A rain location is available. 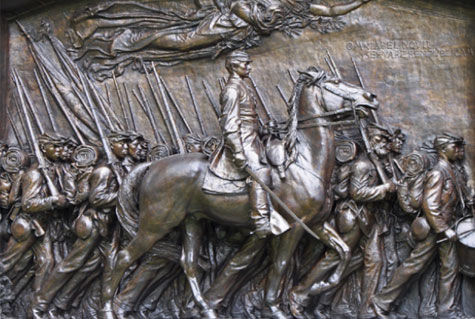 The Partners to renew the Shaw 54th Memorial are committed to ensuring that the Rededication Ceremony is an in-person celebration worthy of the importance of the occasion. 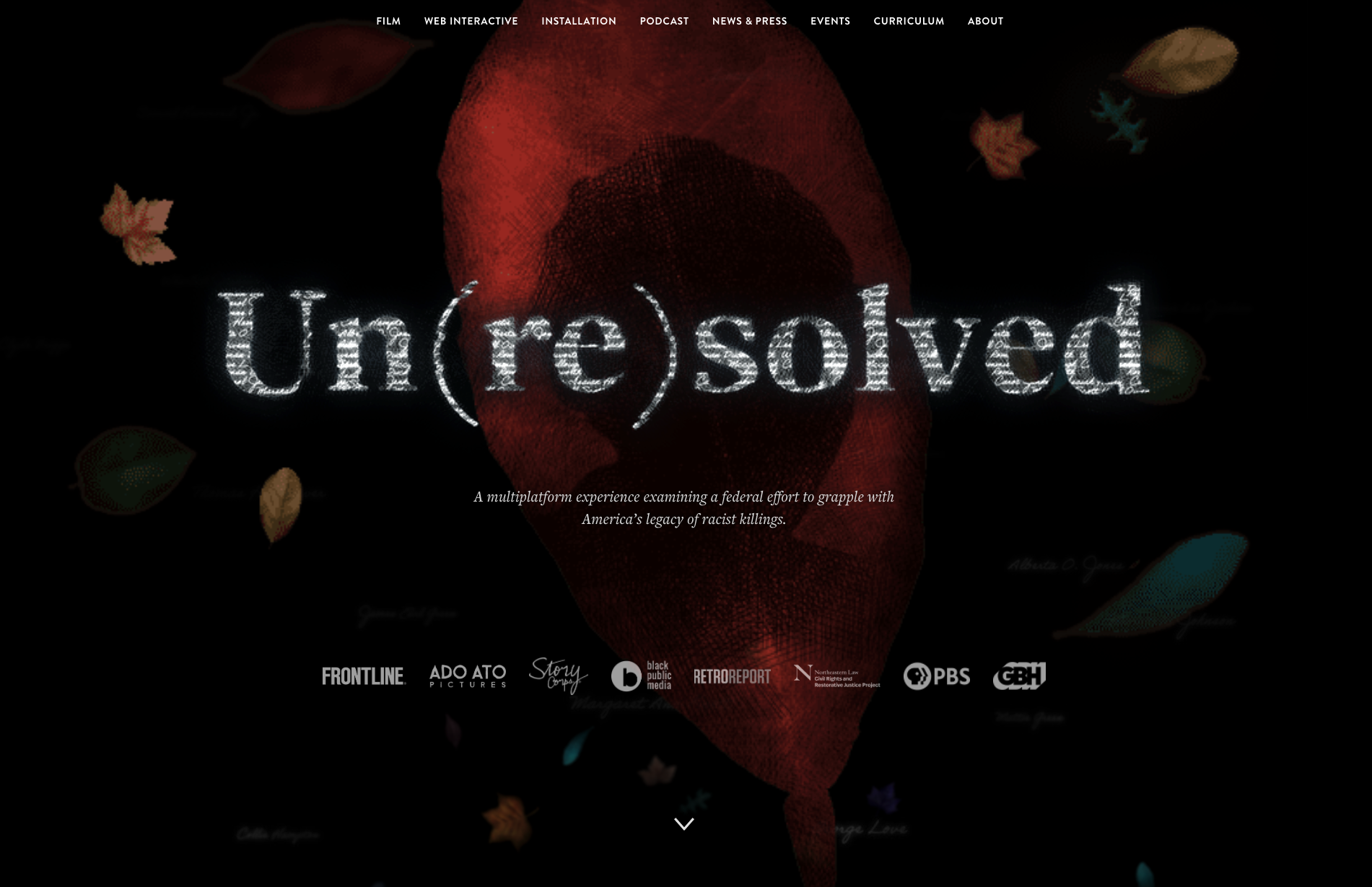 Patrisse Cullors in An Abolitionist’s Handbook: 12 Steps to Change Yourself and the World 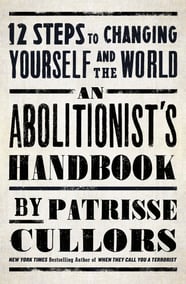 New York Times bestselling author of When They Call You a Terrorist offers a provocative and groundbreaking blueprint for modern-day abolitionists primed to elevate protest into system-changing action meant to transform our world. Presented in partnership with the Museum of African American History and moderated by their Director of Education and Interpretation L’Merchie Frazier.

Patrisse Cullors in An Abolitionist’s Handbook: 12 Steps to Change Yourself and the World (St. Martin’s Press) charts a framework for how everyday activists can effectively fight for an abolitionist present and future. Filled with relatable pedagogy on the history of abolition, a reimagining of what reparations look like for Black lives and real-life anecdotes from Cullors, her new book provides a bold, innovative, and humanistic approach to how to be a modern-day abolitionist. Cullors asks us to lead with love, fierce compassion, and precision. 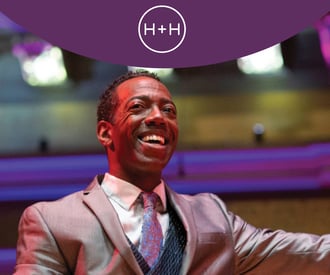 Out of an abundance of caution and in accordance with City of Boston and First Night Boston protocols, there will be no in-person attendance at this year’s Emancipation Proclamation Concert.

We will videotape the performance, and release the recording in the near future.

Join us for our annual commemoration of the original 1863 Grand Jubilee concert in Boston, where members of H+H performed in celebration of Lincoln’s enactment of the Emancipation Proclamation.

The Handel and Haydn Society and the Museum of African American History partner to present the ninth annual Emancipation Proclamation Concert, a joyous celebration of liberty and freedom. Join H+H musicians, National Poetry Slam Champion Regie Gibson, and conductor Anthony Trecek-King to commemorate Boston’s historic central role in the abolition movement, to celebrate the spirit of progress for human rights, and to recognize the role of music in creating alliance and belonging.

JOIN US IN PERSON OR VIRTUALLY ON SUNDAY, DEC 4 -- Get ready for one of the most anticipated annual events with our celebrity host, Anthony Anderson, back in person by popular demand, at the Museum’s Living Legends Gala. On Sunday, December 4, celebrate Boston's unique African American community and experience the compelling stories of the past and present inspire pride and continue the legacy of equality for all.We have planned the best in hybrid programming during the Live In Person Event and Virtually, co-chaired by Dr. David Brown, President of Mass General Hospital, and Ronald L. Walker, II, CEO of The Walker Group. The Gala will honor M. Lee Pelton of The Boston Foundation and Dr. Peter L. Slavin of Harvard University, Dr. Ibram X. Kendi, and Actor, best-selling Author and philanthropist, Hill Harper.Join us Live at the NEW Newbury Boston Hotel for a special in person experience featuring dinner, live entertainment, and YOU socializing in a COVID safe environment, or join us virtually from the comfort of your home. This event promises to be an insightful, fun, and passion-filled interactive experience with a 360-degree virtual event you’ll never forget.